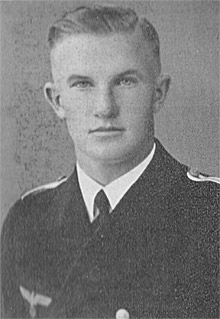 Hans-Joachim Brans entered the newly-created Kriegsmarine on April 5 1935 and became a member of Crew 35. After initial training at Stralsund on the Baltic and at the Naval tactics and torpedo school at Flensburg-Mürwik he served on the 1st world war battleship Schlesien off Spain and Portugal and the pocket battleship Deutschland, again in Spain.

Additional training as a naval pilot followed. During 1939, as a naval 1st Lieutenant (Oberleutnant) he became an observer pilot attached to 1/506 Küstenaufklärungsstaffel, the North Sea coastal unit, based on the island of Norderney and later operating from Amsterdam. In 1940-1941 he was involved in air operations (Luftmineneinsatz) against the Netherlands, Belgium and France, as well as bomber attacks against Great Britain, a total of 95 missions. He was awarded the Luftwaffe Combat Clasp in Gold (Goldene Frontflugspange) and the Luftwaffe Honour Goblet (Flieger-Ehrenpokal).

In spring 1942, at his own request, he was transferred back to the Kriegsmarine and received submarine training at Gotenhafen (now Gdynia, Poland). Brans was promoted to Kapitänleutnant on 1 Nov 1942 and his first posting was as Watch Officer on U-84 under the command of KL Horst Uphoff (also of Crew 35) with the 1st Flotilla, stationed at Brest, France.

On 17 March 1944 Brans died with nine of his crew when U-801 was sunk. The day before, the boat had been attacked by American Avenger aircraft while on the surface, and was left with a major oil leak. On March 17 the boat was sunk in further attacks by Avengers from the escort carrier USS Block Island and gunfire from USS Corry in the vicinity of the Cape Verde Islands in mid Atlantic. 47 men survived to spend the duration of the war in US POW camps, being returned to Germany a couple of years later.