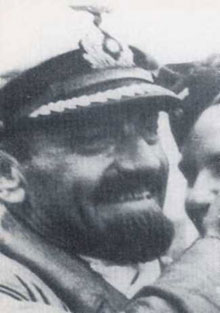 Joachim Zaubitzer joined the Kriegsmarine in 1937. He served as No 2 Torpedo Officer on the heavy cruiser Admiral Scheer April - Sept 1941, then left for U-boat training (Busch & Röll, 1999).

After this valuable experience Zaubitzer began U-boat Commander training with the 24th (Training) Flotilla in Feb 1943, and then U-boat construction familiarization (Baubelehrung) to prepare him for his own command of a new boat. On 22 April 1943 Oblt. Joachim Zaubitzer commissioned the type VIIC U-boat U-974 at Hamburg (Busch & Röll, 1999).

Kptlt. Zaubitzer served at the Torpedo School Flensburg-Mürwik as Training Leader from Nov 1943 until the end of the war (Busch & Röll, 1999).