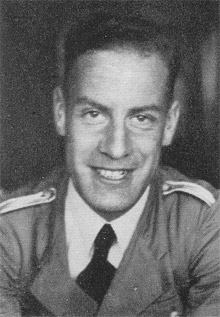 Ernst-Günter Heinicke joined the Reichsmarine in 1927. He commanded the small coastal boat U-3 between Sept 1937 and July 1938 before moving on to the larger type VIIB U-51 in August 1938. He commanded U-51 for a year, and then transferred to U-53.

Heinicke took U-53 on two patrols, spending 72 days at sea, and sank two ships totalling 14,018 tons before leaving the U-boat force to join the merchant raider Widder in January 1940. He served on Widder until February 1941, after which he filled several staff and training positions, mostly concerning torpedoes.

In March 1945 he was assigned as Baubelehrung (U-boat construction familiarization) commander of the new type XXI electroboat U-2561, but the boat was still uncompleted at the end of hostilities, and was afterwards broken up on the stocks.

After Germany's surrender, Heinicke was a POW until 6 October 1945.