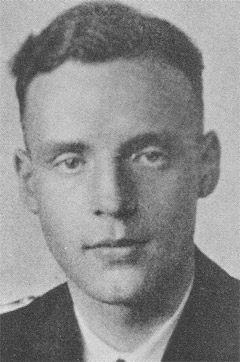 Gunter Jahn began his naval career in April 1931. Later he served for more than two years on the light cruiser Nürnberg, including nine patrols in the first year of the war. In March 1941 Jahn joined the U-boat force, his first patrol being on U-98 in September 1941.

In November of that year he commissioned U-596. On the boat's second patrol Jahn broke through the Straits of Gibraltar and then went on to become one of the most successful U-boat commanders in the Mediterranean. In July 1943 he left the boat to become commander of the 29th Flotilla. In September 1944 he became a French prisoner of war, and was released nearly two years later.

He is buried in Straubing, Bavaria, Germany.