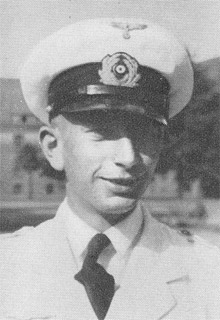 Friedrich Wilhelm Karl Markworth began his naval career in April 1934. He served on the light cruiser Königsberg and the heavy cruiser Blücher before transferring to the U-boat force in July 1940. He had two patrols on U-103 as I WO (1st Watch Officer). In June 1942 he took over the very successful U-66, one of the five Operation Drumbeat boats, from Korvkpt. Richard Zapp.

On his first patrol on U-66 he sank nine ships with a total of 48,896 tons, mostly in Caribbean waters. He also laid mines at Port Castries on Santa Lucia on 20 July 1942, which sank three small Allied warships two weeks later.

During the third patrol Markworth was severely wounded when U-66 was attacked on 3 August 1943 by aircraft from the US escort carrier USS Card. On 6 August, U-66 met the fuel supply boat U-117, whose WO, Oblt. Frerks, took over command from Markworth and brought U-66 back to base. U-117 herself was sunk while U-66 was at her side (Niestlé, 1998).