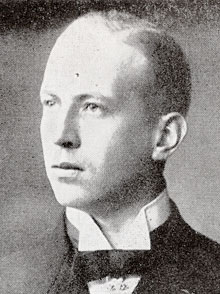 Johannes Lohs was born on 24 June, 1889 at Einsiedel, Sachsen. Son of plant owner Oswald Lohs. First ran school in his home village and later a grammar school in Chemnitz.

He entered the Kaiserliche Marine on 1 April, 1909. Had several commands as Fahnrich zur See and served from 1 October 1912 on the cruiser Strasburg on which he saw half of the world.

Saw action for the very first time on 28 August 1914 and was promoted Lt.z.S. in the autumn of 1915. Moved to the U-Bootschule and got his first U-Boat command on UC 75 of the Flandern Flottille on 17 March 1917. He took that boat on 9 patrols off the British coast.

On 2 January 1918 he became CO of the UB 57, taking over the command from another legendary U-Boat commander; Otto Steinbrinck. Lohs had also some very good ideas on U-boat warfare and new tactics and in April 1918 he received the Pour le Mérite.

On 3 August he sailed from Zeebrugge for the last time. The last contact he made with base was on the evening of the 14th, as UB 57 was homeward bound roughly in the area of the Sandiette Bank, east of the Straits of Dover. Nothing more was heard. UB 57 is believed to have hit a mine. Ships sunk on this last patrol were the Clan Mac Vey (5815 BRT), Glenlee (4915 BRT) and City of Brisbane (7094 BRT). In total, Lohs sank approximately 165.000 tons of shipping.

Lohs' body washed up on shore a week later. He is buried in the military cemetery at Vlissingen *.

On 4 October 1937 the III Unterseebootflottille was named after him at Kiel.

* According to this blog post citing the town archivist at Vlissingen, Mr. Meerman, the bodies of Germans were moved from Vlissingen to Ysselsteyn in the Dutch province of Limburg in 1949. The WWI casualties having been moved to the new cemetary during WWII to join the men who fell in the Second World War. On this Flickr page you can see photos of the cemetary at Ysselsteyn - the only German military cemetary in Netherlands.