What happened on
31 July? 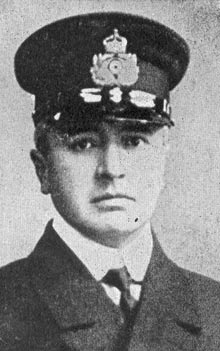 Born on the 19th December 1888, son of a professor at Lippstadt. He entered the Kaiserliche Marine on 3 March, 1907. Became a Fahnrich zur See in 1908 and followed several courses such as artillery, torpedoes. In 1910 became he a Lt.z.S. serving on the cruiser Bremen. In 1911 served at the 1 Matrosen Division at Kiel and specialized further on Torpedo’s. Served afterwards on the U 15 and U 8 and became Oblt.z.S.

When war broke out he was CO of the U 6. In December he was serving on the U-Flottillen Torpedoboot S 122 and the next month he returned in command of the U 6. On the 15th March 1915 he moved to the Marinekorps Flandern to become CO of the very first U-boat of the Flandern Flottille, the UB 10. He remained CO of this U-boat until 12 January 1916. He now received the UB 18 and served on it until the 27th October 1916. In this period Steinbrinck would get enormous reputation as a U-boat commander sinking 74.781 BRT in 14 operations and the British submarine E22.

He was the third U-boat commander to receive the Pour le Mérite on the 29th March 1916. On the 10th November 1916 he took over the command of UC 65 until the 31st July 1917. In 8 operations he destroyed 94 merchant ships or 99.803 BRT and the British mine cruiser Ariadne of 11.150 tons. On the 26th of April he became Kap.lt. and also got married later to Lola Vogelsang. On the 1st of August he took command of UB 57 and again he was showing he was an ace. On the 2nd of January 1918 he left command to Johannes Lohs. He was completely exhausted and after recovery he became 1st Staff officer with the Fuhrer der U-Boote Flandern, Bartenbach. He sank a total of 231.614 BRT and a cruiser and a U-boat. In October 1918 he served with the U-Boot Inspection.

After the war he was active in the Verein Deutscher Eisen und Stahlindustrie and lots of other firms, many times as President. For his work for German industry he received in 1935 the honorary title of Standartenfuhrer at the SS. In 1939 he was vice president of the Vereinigte Stahlwerke.

During WW II he was active as a Fregatten Kapitän and a number of high positions in industry.

He was interned in August 1945 for his honorary title in the SS (!) and received 5 years of imprisonment for this reason and this reason alone. He became badly ill but his British guards refused to have him treated. Finally in August 1949 they did give authorization for an operation, but he died only four days later, on the 16th August, because he had become too weak. He was buried at Lippstadt.