Knowing the U-boats were now staying submerged during daylight hours and surfacing at night to charge batteries and ventilate the boat, the escort carrier commanders began to consider the idea of night flying. While various ideas had been tried by a few of the commanders to extend the hours of flying operations, no carrier had as yet adopted true night flying operations. Captain Gallery, after discussing the idea with his pilots, decided that Guadalcanal on its next cruise would try night flying on an experimental basis. The idea was to begin night operations during the full of the moon and as the moon waned to see if the flying could be extended into the period of complete darkness.

Guadalcanal departed Norfolk on 7 March 1944 on its second cruise. Task Group 21.12 included the DD Forrest and four new Edsall class DEs; USS Pillsbury, Chatelain, Pope, and Flaherty. VC-58 under the command of Lt.Cdr. Richard K. Gould was aboard. The hunting ground this cruise was to be between the Azores and Gibraltar in the lane used by the U-boats coming out of the Bay of Biscay.

Tenth Fleet was tracking many U-boats transiting the Bay but Guadalcanal flying its aircraft mostly during daylight hours was unable to make contact. This area was patrolled for about a month without success. 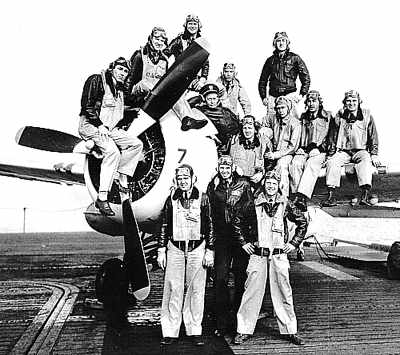 Departing Casablanca on 30 March, the Task Group began the return trip to Norfolk. The full moon occurring in early April was rising at about sunset providing ideal conditions for night operations. All the TBMs were equipped with radar which could be used to detect and localize the surfaced U-boats but it was still necessary to establish visual contact with the submarine in order to make the final approach and launch weapons.

Visual contact at night was difficult. Some use of flares to illuminate the target had been tried but these often blinded the pilot and wasted time in dropping them in the correct position. Although later in the war, some TBMs were equipped with searchlights, they were not in use on the Avengers at this time. Therefore a full moon was extremely valuable in executing a night attack. The pilot would use his radar to vector in on the target and make his final visual approach on a surfaced submarine backlit by moonlight reflecting on the sea surface.

Lighting and sea conditions being satisfactory, Captain Gallery's night flying program was put into operation. By the end of the first week in April the VC-58 pilots had become fairly proficient at night flying and routine night operations were adopted. The results were not long in coming.

On the morning of 8 April, Tenth Fleet sent a high priority message to Guadalcanal providing a "fix" on a submarine about 200 miles northwest of Madeira. The submarine was U-515, Kapit‰nleutnant Werner Henke in command. Guadalcanal changed course and headed for the position given by Tenth Fleet about 40 miles away. At sunset 4 Avengers were launched to conduct a sweep extending 60 miles in front of and 100 miles on each side of the carrier.

During a flight recovery, the chevron seals on the #2 arresting gear hydraulic unit blew out disabling wires #2 & #4. These wires being in a critical part of the flight deck landing area, it was decided to scrub night operations until the arresting gear was repaired. However, this decision was soon reversed. (A timeline will be used to describe the events which followed):

April 8
2115 - Flight of 4 Avengers is recovered. During pilot debriefing it is discovered one of the pilots had seen a U-boat which submerged before he could attack. His radio message reporting the sighting was never received by Guadalcanal. Captain Gallery decided to continue night operations despite the inoperative arresting gear unit but to await the launching of the next flight for an hour to give the U-boat an opportunity to surface.

2215 - 2 Avengers are launched. Several more are armed and spotted on the flight deck for immediate launch if they should be needed.

2330 - U-515 is spotted on the surface silhouetted in the moonlight. An Avenger attacks, dropping two MK-47s which do no damage. U-515 puts up heavy anti-aircraft fire before submerging.

April 9
0116 - Guadalcanal launches another Avenger to assist in the search.

0200 - Guadalcanal picks up a radar contact about 5 miles ahead. (Op analysis later evaluated this contact to be either U-68 or U-214 both of which are in the area.)

Chatelain and Pope are detached from the screen and sent to the contact areas.

Pope established a contact and launches a hedgehog attack. At dawn one of the air patrols spots an oil slick in the vicinity of Pope's attack. Propeller noises are heard on sonobuoys.

0630 - Pillsbury and Flaherty are detached from the screen to assist Pope and Chatelain. U-515 has been unable to charge batteries and is now in a desperate position.

0640 - An Avenger finds U-515 surfaced and drops depth charges. Badly shaken but not broken, Henke submerges. But time is running out for U-515. Pillsbury and Flaherty search the contact area, dropping hedgehogs. U-515 goes deeper and deeper attempting to evade the attackers. Chatelain and Pope join up on the contact.

1030 -Pope gains a sound contact at 700 yds - loses it- and then regains it. From that point on continuous sound contact is held for the next 4 hours. The DE's continue their depth charge attacks.

1250 - a large oil slick and air bubbles are spotted. U-515 is very deep and hurting bad; damage control is attempting to seal numerous leaks and the boat is down 30 degrees by the stern. The aft torpedo room is sealed off.

1405 - Unable to control trim, Henke blows his tanks and comes up in a 45 degree bow-down position. U-515 broaches in a welter of spray and foam about 75 yards off Chatelains beam. The U-boat sailors come pouring out on deck and manage to get off a few rounds from the deck guns before Chatelain and Flaherty sweep their decks with return fire. An Avenger and two Wildcats are making strafing runs and firing rockets at the sub. The action is visible to the crew of Guadalcanal about 4 or 5 miles away.

1413 - An explosion occurs within U-515, smoke comes pouring out of the conning tower, and the crew abandons ship. 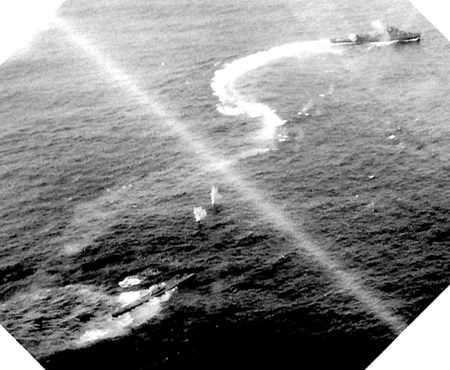 April 10
0420 - an Avenger reports an attack on a surfaced submarine. The submarine is submerging when the first Avenger attacks dropping depth charges just behind the conning tower which produces an oil streak. A Wildcat goes in on a strafing run followed by a second Avenger delivering rocket fire followed by a depth charge drop.

0510 - Chatelain, Pillsbury, and Flaherty leave the screen for the contact area.

0655 - Guadalcanal receives a message reporting the sub has been sunk. Chatelain recovers one survivor floating in a huge pool of oil and debris and supporting one of his comrades who is dead.

Lt..(jg) Parson's Avenger is recovered and found to have a 20mm shell hole in the wing. 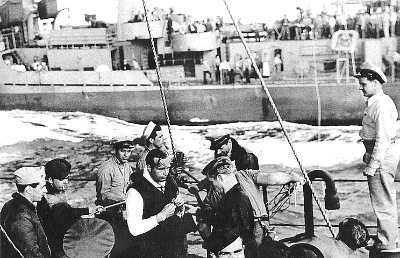 By late afternoon of the 10th, transfer to Guadalcanal of all the U-515 survivors, the commanding officer and 42 crewman, had been completed. Chatelain transferred the lone survivor from U-68, Hans Kastrup, a lookout on the bridge when the attack occurred. With the transfer of the survivors completed, the Task Group set course for Fayal Island to refuel. 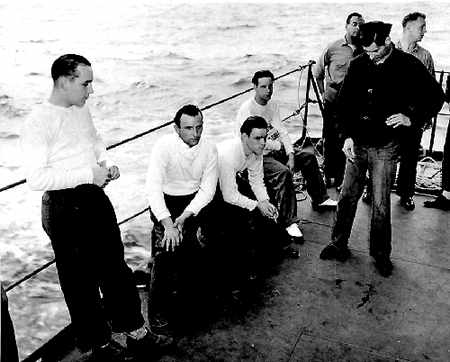 In the early morning of the 14th a British Wellington flew over and briefly illuminated Guadalcanal with his Leigh Light; an action which earned him a few curses but otherwise caused no harm.

At 0825 on the morning of 17th April, the Task Group anchored in Horta Bay, Fayal Island and the carrier refueled from the British ship K190. At 2114 the Task Group departed for Norfolk. No further submarines were encountered on the return trip and the Task Group arrived back in Norfolk on the 26th of April.

In his Action Report, Captain Gallery wrote, "The most impressive feature of this cruise was that 2,100 hours of intense daylight operations accomplished nothing, whereas 200 hrs of night flying resulted in two kills." Night operations were soon to become routine on the escort carriers.