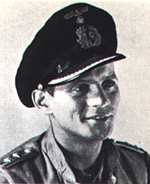 Werner Hartmann spent the first years of his career as commander of the torpedo boats Seeadler and Albatros. In 1935 he transferred to the U-boat arm and remained there through the end of World War II. With his first U-boat, U-26, he patrolled in Spanish waters during the Spanish Civil War in 1937-38. I WO on board was the later famous Oberleutnant z. S. Günther Prien.

During the first months of the war Hartmann was Commander both of U-37 and of the 2nd Flotilla. In October 1939 an attempt was made to direct a wolfpack from another U-boat at sea. This leader was Korvkpt. Hartmann. But this strategy proved inefficient, and BdU decided henceforth to direct the boats from land.

After only three patrols Hartmann received the Knights Cross. Then for six months he was I. Asto in the BdU-staff. In November 1940 he became the commander of the 2nd ULD and a year later took command of the 27th Flotilla in Gotenhafen. 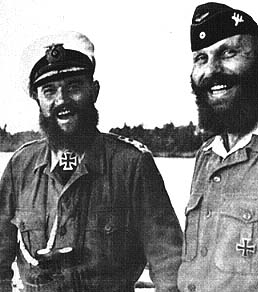 In November 1942 he took over one of the large type IXD2 boats and completed with U-198 the third longest (200 days) patrol ever undertaken.

In 1944 he became FdU Mittelmeer (FdU Mediterranean) and in this function received the Knights Cross with Oak Leaves.

Left: Werner Hartmann (left) just back from his incredible patrol.

After the war he spent several years in the Bundesmarine (German postwar Navy). He retired as Kapitän zur See.