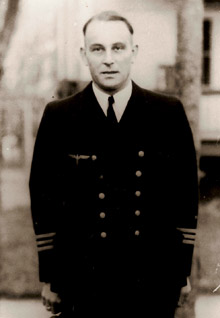 The 88mm deck gun of Type VIIC boat U-486 seen in front of the tower. Illustration by Morten Kutschera.

The German U-boats of types I, VII, IX and X had a very powerful secondary weapon which was the deck gun. Each boat had one in front of the conning tower and with a good crew they could fire 15-18 rounds a minute. Often used to finish off damaged vessels or sink smaller ships the gun normally had a crew of 3 to 5 and was usually commanded by the second watch officer (IIWO).

Close-up of the 88mm deck gun. Illustration by Morten Kutschera.

In order to use the weapon the U-boat had to be on the surface naturally and it was normally not used when aircraft were suspected to be around. It required a line of men (3 which on the deck) to transport the ammunition from the main locker below the control room to the gun. The used rounds were taken back into the boat. The U-boats had a small water-proof ammunition locker for the gun on the deck in order to be able to start firing almost immediately when the order was given.

The smaller Type II coastal U-boats had no deck gun.

In 1937 plans were drawn up for type XI U-boat cruisers. Those huge boats would have had 4 pieces of 12,7cm guns in two separate towers. They were not built (see our "U-boat projects and proposals" page).

The type VII U-boats had the 8,8cm gun. This weapon is not to be confused with the famous German Army 8,8 anti-tank / anti-aircraft gun which was probably the best weapon of the war, they did not even use the same ammunition. The 8,8cm gun fired a 12-14 kilogram round (9kg warhead), on board were usually 250 rounds. From June 1943 the Atlantic-boats left their bases without the deck gun. Only in the Mediterranean and the Northern Sea boats kept their guns for a few months longer. In July 1944 some of the VIIC boats from the 8th Flotilla in Königsberg got their guns back for the patrols in the Baltic Sea against the Russians.

The 88mm naval deck gun was not capable of anti-aircraft fire since its maximum elevation was only 30 degrees.

The much wider deck of the larger I, IX, and X U-boats could accomidate the much more powerful 10,5cm/45 gun than 8,8 cm /45 on the narrow deck of the VII boats. These larger boats normally had 110 rounds of ammunition, although the IXD variant had 150 rounds, and one boat, the U-196, had 240 rounds. 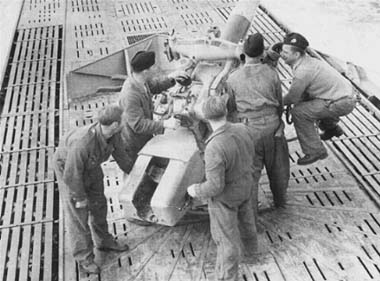 Few commanders used the deck gun with better results than Reinhard Hardegen of U-123 did on his first 2 missions off the American coast in early 1942. His boat was of type IXB and thus had the larger 10,5cm version of the gun. 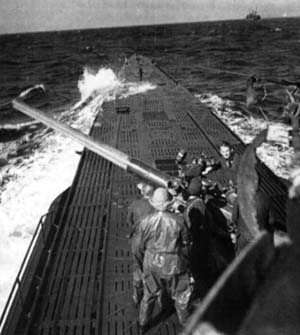 U-123 during a deck gun attack, note the merchant ship ahead.

The crews had some problems using the guns. There were several instances of barrel detonations, which killed or wounded some crew members. Often the reason was that the gun crew forgot to take away the muzzle protector from the gun - resulting in cartoon like blown up barrel if the gun gun was fired like that.

Sometimes the gun was used to shell shore-based targets like in the Caribbean where they fired at various installations like oil storage's and alike or in the Northern Sea where they damaged some radio stations. An excellent hit was landed by U-242 on 10 Oct, 1944 when it shot down a Russian aircraft with her 8,8cm deck gun!

19 Apr, 1942 In the Caribbean Sea U-130, under Korvkpt. Ernst Kals, successfully bombarded the oil refinery and storage on Curacao with his 105mm deck gun.

The end of the deck guns

After the massive anti-submarine build-up by the allies in 1942 and 1943 the deck guns were removed from almost all the boats in 1943 and 1944. A few commanders were allowed to retain them though, esp. the ones who commanded the boats in the Indian Ocean (the Monsun boats). But, in effect, from 1943 the deck gun was, for most boats, a thing of the past.