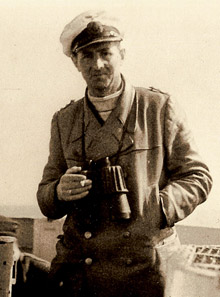 23 Nov 1940
While attacking convoy OB 244 (4 ships sunk) the boat was seriously damaged by a collision with an unidentified object (probably a convoy vessel) and had to return to France for 50 days of repairs. (Sources: Blair, vol 1, page 208)

12 Aug 1941
The boat was attacked by convoy escorts near Portugal. 126 depth charges were dropped, including 30 "close by" as reported by the Germans, but caused only moderate damage. The boat returned to France, having been at sea for over 60 days when this attack took place. (Sources: Blair, vol 1, page 336)

21 Oct 1941
After the British Armed Merchant Cruiser HMS Aurania launched a lifeboat by mistake on being damaged but not sunk by torpedoes from U-123, one seaman was rescued and taken on board as a POW. In the evening the boat suffered slight damage from two bombs dropped by a British Sunderland flying boat.

19 Jan 1942
Kosmos II tried to ram the surfaced U-123 off Oregon Inlet. The U-boat was in shallow water, without any torpedoes left and one of the diesel engines out of order. The Germans managed to get the engine running when the ship was only 75m (246 ft) away and slowly out-distanced her at full speed.

27 Mar 1942
After being torpedoed by U-123 off the US east coast, the American Q-ship USS Atik (AK 101) took the Germans by surprise with their counter-attack. One man from U-123 was fatally wounded and the Q-ship was sunk with all hands. [Fähnrich zur See Rudi Holzer] (Sources: KTB U-123)

2 Apr 1942
During an attack on the American steam tanker Liebre in shallow water off North Carolina, the boat was forced to dive by a patrol vessel which then dropped a single depth charge. U-123 only escaped undamaged because the attack was not followed up. (Sources: KTB U-123)

11 Apr 1942
After sinking Gulfamerica the boat was located in shallow water by an aircraft which directed a destroyer to the position. At 09.17 hrs, six depth charges were dropped as U-123 was moving over the bottom at a depth of 20m (66 ft), badly damaging her. The boat "played dead", and despite air bubbles escaping from damaged valves, no more depth charges were dropped by the destroyer, which left after an hour. Most of the damage could be repaired, and the boat continued the patrol. (Sources: KTB U-123)

11 recorded attacks on this boat.

U-123 was one of the most famous U-boats in the war. U-123 took part in the opening of the Paukenschlag (Drumbeat) operations in January 1942 and completed two very successful patrols on the US east coast.

27 Mar 1942
After being torpedoed by U-123 off the US east coast, the American Q-ship USS Atik (AK 101) took the Germans by surprise with their counter-attack. One man from U-123 was fatally wounded and the Q-ship was sunk with all hands. [Fähnrich zur See Rudi Holzer]