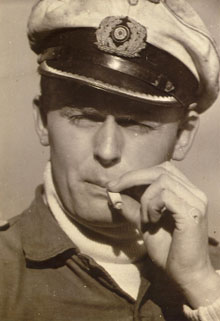 Klaus Bargsten joined the Kriegsmarine in 1935 after previously serving in the merchant navy. He joined the U-boat force in 1939, and after a short period on U-6, he attended baubelehrung for U-99 and then served as IWO (1st Watch Officer) under Kptlt. Otto Kretschmer.

He left U-99 in January 1941 and in March commissioned U-563. On his second patrol he sank the British destroyer HMS Cossack (1,960 tons). After the third patrol he left the boat and three months later commissioned U-521. This boat was sunk on 2 June 1943 by the US sub chaser PC 565 100 nautical miles east of Cape Hatteras (Niestlé, 1998). Kptlt. Bargsten was the sole survivor from the crew of 52, and afterwards spent more than three years in Allied captivity.