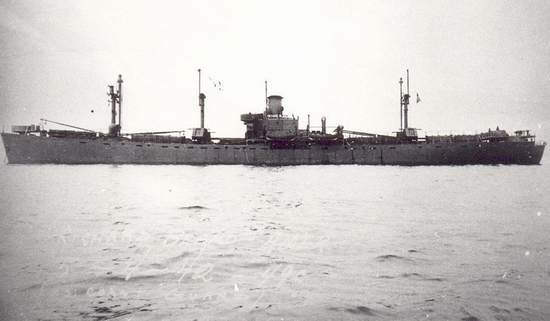 Information on the Liberty class:

The basic hull model for the vessels was based on the SS Dorington Court, a British steamer built in the 30's with raked stem, cruiser stern, single screw and balanced rudder. The main propulsion unit was a three cylinder, triple expansion, reciprocating steam engine whose design dated back to 1896.

Because Britain had no domestic oil at the time, it was to be powered by coal-fired scotch or Fire-tube boilers. It was 441 feet long, with a beam of 57 feet and displaced about 7,500 tons. It could carry 9,150 tons of cargo in its five holds. The cruising range would be 8,000 miles at 11 knots.

The United States Maritime Commission made a number of alterations to the Ocean class design. Some were made to conform to American manufacturing and shipbuilding standards, others to accommodate the scarcity of certain materials, and then some to meet the need to build as rapidly and as cheaply as possible. This resulted in the designation EC2-S-C1, originally referred to as 'emergency ships'.

One of the more common nicknames was Ugly Duckling inspired by their utilitarian appearance, but in 1941, after President Franklin D Roosevelt told the country that these ships would bring liberty to Europe, they became known as Liberty Ship.

Below are the merchant vessels of the Liberty class:
You can click on any of the header below to sort by that header.